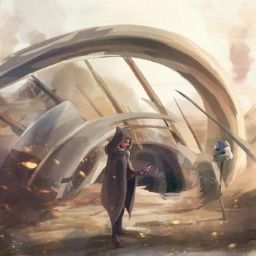 Once again Quentin Tarantino has done it - another long and in depth film(almost three hours long for this one!) as the director mixes plot and stories that blend both drama,comedy and action all in one. Again as is common in any film of Tarantino's is the cast is always all star and a memorable ensemble and it seems the acting and chemistry is always in top form. And this might be the director's finest film to date for it's look back in time to a memorable yesteryear era! "Once Upon a Time in Hollywood" is set in 1969 at the height and end of Hollywood's golden age in era of free spirits and cultural uprising. It follows the life of one Rick Booth(in fine form from Leonardo DiCaprio) a past his prime and faded TV actor who now struggles even to get small parts in TV westerns, and Booth seems hopeless yet he's still friends with his buddy and partner in crime that being his stunt double Cliff Booth(Brad Pitt). The two burn plenty of midnight oil together still a ray of light is found when Rick gets a second chance and a rebirth by doing international pictures and marrying an Italian beauty. In somewhat of a wild card and subplot story Dalton's neighbor is the sexy and young actress Sharon Tate(Margot Robbie) who spices and lightens up the screen as a young star in the making. Also introduced is the strange and notorious Charles Manson. The film even has a surprise and happy ending! Overall excellent well done epic movie that pays homage to the past as it's a showcase of different stories that connects up with different characters.

Rayaan posted a review for The Lion King in Movies

We are in the age of remakes of animated classics and it is the turn of The Lion King and I thought this was a fantastic representation of a classic film, it is not a replacement for the original film but a brilliant film to go alongside it. The premise of the film sees new heir to the throne of the Animal Kingdom Simba have to grow up and overcome the troubles of his nefarious uncle Scar. We see two versions of Simba and both are great, the child version of Simba really does a great job at being innocent and delivering a heartfelt performance. Donald Glover playing the adult version also really worked and he nailed the character and really provided a great voice acting performance. In my opinion a real highlight of this film is the performance of Chiwetel Ejiofor as Scar, he has such a presence about the role in this film. Scar is a great character and Ejiofor really bought all the complexity of the character out and made him a very memorable villain. Another big highlight of the film is the fantastic chemistry between Billy Eichner & Seth Rogen as Timon & Pumbaa, they are so funny in the film and provide a great counter in this film from some of the draker moments in the film. Alfre Woodard, Beyonce, John Oliver & James Earl Jones all do great jobs and emphasise why this is one of the best casts assembled for any movie. The story is goof, delivering the mix of drama and humour that would be expected in this film, however, like the majority of these Disney rermakes the film is quite formulaic and it is noticeable in this film that it is very similar to the original film. The script is great, this film for me does a really good job, it does a great job of blending a fun film with great dramatic moments in it. The style is amazing in this film, visually it looks stunning with some of the best CGI that you are gonna see in any film around, plus the use of colour is really important in this film and the story of the film. All the songs are back from the original and they are sung excellently by the cast. Overall I am a fan of thise remakes from Disney and The Lion King is a fantastic family film that should be seen by all members of the family.

Rayaan posted a review for Super 30 in Movies

Super 30 - is inspired by the real life character of Anand Kumar, a mathematician who runs an institute for the underprivileged by the same name in Bihar. In real life, Anand Kumar runs a coaching centre to prepare candidates for the IIT JEE, but inducts 30 economically backward students from among them into Super 30, a school that has won many accolades for the humanitarian approach and its academic excellence. In the movie though, Anand (Hrithik Roshan) faces the impossible task of chasing his dream to attend classes in the Cambridge University due to his family's poor background. When his father dies, Anand has to forego his ambition and resorts to selling papad to make their ends meet. He enjoys a brief flirtation with money and fame when an education tycoon picks him up from his personal nadir to run his coaching centre, but soon gives it all up due to an inner calling to alleviate poor but ambitious students to achieve their IIT dreams. Super 30 is Anand Kumar's trials and tribulations in this journey. Hrithik Roshan is powerful in his discharge of the responsibility and puts in his heart and soul into the role. But playing this character was never going to be easy, especially with the small town attributes. This is where Roshan falters - his gait is the usual trademarked one, and the accent is gravely inconsistent. Beleaguered director Vikas Bahl makes Super 30 a commercial hash with some gimmicks including a prolonged and ridiculous take on a Sholay song and a contrived hospital rescue of the hero. I wish he had spent more time to help us connect with the 30 underprivileged students or developed the underdog theme to a more powerful essay. Pankaj Tripathi as the education minister and Aditya Shrivastav as Lallan Singh are wasted. Mrunal Thakur has precious little to do. Nandeesh Singh, Virendra Saxena, Amit Sadh and Surinder Kaur are impressive though. Music by Ajay Atul is ordinary.

Rayaan posted a review for Spider-Man: Far from Home in Movies

After the epic conclusion to the Avengers series, 'Spider-Man: Far from Home' could've been a letdown. Luckily, it's not. It's an epic, mind-bending adventure that improves on 'Homecoming', builds on the post-'Endgame' universe, introduce some cool new tech (plus some awesome new Spidey suits) and is a lot of fun. Tom Holland is perfect as Spidey/Peter, capturing Peter's adolescent awkwardness - especially as he tries to win over MJ (Zendaya) on a school trip to Europe. He also embodies Spidey's mix of self-doubt, strength and humour. Mysterio's introduction (Jake Gyllenhaal) brings some mystical elements to the normally down-to-earth Spider-universe. It's done well, doesn't feel out of place, and leads to some wonderful fight scenes between Spidey and Mysterio. In the Marvel tradition, it's essential to stick around for the two post-credit scenes. They're genuine game changers for Spider-Man (including the surprise appearance of a favourite character) and the next phase of the Marvel Cinematic Universe.

Rayaan posted a review for Article 15 in Movies

It's incredibly similar to an English movie "Mississippi burning". Article 15 is about casteism in India and MB is about the racism in America. That alone isn't why it seems similar. Many scenes looked similar there are some characters that also feels like they were taken from MB. But this isn't to discredit Article 15 in any way. Even though both topics are same, it's both about bigotry and discrimination. The movie shoots arrows in the air and hopes of injecting them as thoughts within the audiences. It merely uses a rape case, an actual one, to drive its own agenda. Which is incredibly disheartening when you think of it. It ends up further dividing the audience on the name of uniting them.