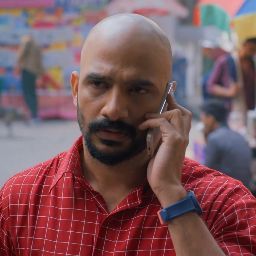 AK vs AK is a 2020 Indian Hindi-language black comedy thriller film directed by Vikramaditya Motwane and is the first release under his banner Andolan Films. Anurag Kashyap, the executive producer and dialogue writer, also stars alongside Anil Kapoor as the title characters, with Yogita Bihani, Sonam Kapoor Ahuja and Harshvardhan Kapoor in supporting roles. The story, written by Avinash Sampath, utilises a film-within-a-film narrative where the main actors play fictionalised versions of themselves. After a public feud between Kashyap, an eccentric film director, and Anil Kapoor, an aging film star, the former kidnaps the latter's daughter (Ahuja) and forces Kapoor to search for her while his assistant (Bihani) films them as part of his next project, with most of the film shown from the perspective of her camera.